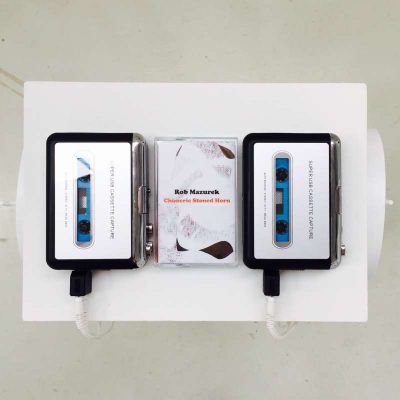 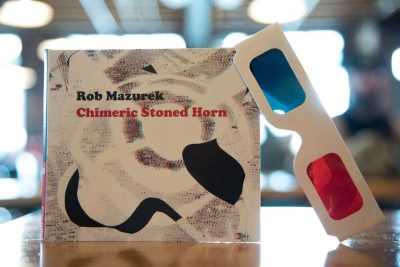 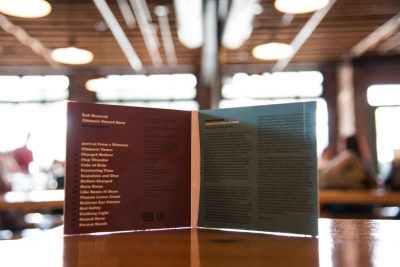 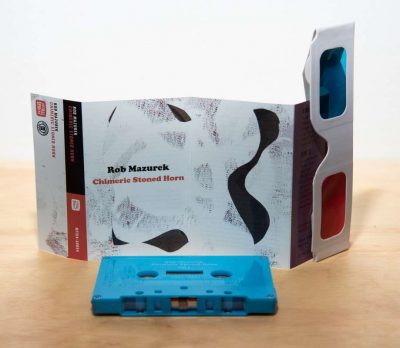 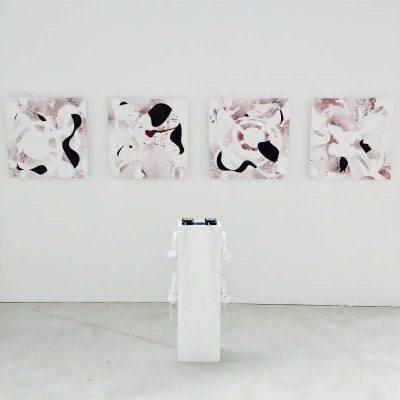 This is Mazurek’s first recording featuring Piccolo Trumpet, acoustic and processed with his modular synths, with modules by Make Noise, Industrial Music Electronics and Doepfer, alongside voice incantations and mystic bell projections. It is also one of the first Mazurek albums recorded entirely in his new home in Marfa, Texas. “Chimeric Stoned Horn” picks up where “Vortice” left off, but goes much deeper and in different nuanced ways throughout the 40 minute run time.

The artwork for both the CD and Cassette versions feature 3 of the 4 “Chimeric Stoned Horn” 3D lithographs that Mazurek created for CONSTELLATION SCORES, his solo exhibition opening Sept 16, 2017 at URDLA in France, as part of the Lyon Biennale. All 4 of the “Chimeric Stoned Horn” lithographs will be on display and will be accompanied by 4 cassette players playing the sound of this album as you look at them through 3d glasses. More info: www.centredelagravure.be/fr/news-articles/17322-rob-mazurek-constellations-scores—prints-objects-paintings-and-sound

Both the CD and Cassette versions come with 3D glasses for viewing! Astral Spirits first CD release! Also available as a more limited Cassette, both are out Sept. 29, 2017.

Rob Mazurek’s artistic practice combines sound and vision in ever-changing constellations, creating audiovisual composites. Aural and visual experiences are treated interchangeably, with one influencing the other. Colours, projected as video or painted on paper, frequently serve as the departure point for his musical improvisations. Inversely, an unheard sound source lets light flicker erratically in Music for SHATTERED LIGHT BOX and 7 POSTERS, and the multimedia project SOUNDLIGHT 1 allows for Mazurek’s cornet improvisations to appear as changing shapes and colours on a screen. His latest exhibitions THE SHAPING LIGHT (Chicago) and MARFA LOOPS, SHOUTS AND HOLLERS (Marfa, TX) combine painting, sculpture, light and sound, blurring the lines between different modes of perception in order to reach qualities of experience normally hidden. Synaesthesia is what he’s aiming for, painting in sound, composing with colour and light, hopnig to thereby overcome the barries between our senses.

His present exhibition at URDLA builds on these endeavours, Mazurek employs various techniques such as lithography, spray painting and collage, combining them in unexpected ways. Delicate coloured particles, suggestive of distant interstellar nebulae, are superposed in the lithographic process, with stereoscoppy oftentimes adding a three-dimensional effect. Further depth is created by cutting up and combining these prints, creating layers upon layers of diffuse colours. All with the stated intent of “exploding the image,” moving from a simple flat surface to bottomless constructions which engulf the spectators and make them question their spatial relation to the work in front of them. One finds here a certain kinship with Mark Rothko, who wanted his viewers to be visually surrounded by colours, therefore asking them to stand close to his works. But it is likewise the imposing figure of Morton Feldman, seminal composer and a close friend of Rothko’s, which casts its shadow on Mazurek’s work. For at the centre of the artist’s hazy coloured clouds there is, unsurprisingly, sound – in particular the measured tectonic shifts of Feldman’s solemn music, as well as the grainy texture of some of Mazurek’s electronically aided productions. Sound is transposed into visual phenomena, with an ease that is the artist’s own, but without a rigid system of equivalents imposed on the viewer. Experiencing waves resonating throughout the body.

A new recording of solo works called CHIMERIC STONED HORN will be released by the label Astral Spirits in tandem with the exhibition, it’s title pairs these new sounds with the 3D lithograph cutups of the same name shown at URDLA and by evoking the hybrid create of ancient mythology, hints at the composite nature of the works. This exhibition is thus a further demonstration of the interconnectedness of Rob Mazurek’s visual and musical output. It is the latter that remains better known, having earned him fame as a prolific and versatile composer. Since his beginnings in the Chicago jazz scene his musical interests have spread out in all directions, resulting in a vast catalogue that defies simple categorisation. Whether he’s exploring musique concrete and electronic sound in his solo recording, composing for a great variety of groups like his volcanic Exploding Star Orchestra or the longstanding Chicago Underground Duo, or collaborating with musicians like Pharoah Sanders, Roscoe Mitchell or the late Bill Dixon – Rob Mazurek is sure to stay in constant transformation.

THE REVIEWS & ARTICLES:
Review by KARL ACKERMANN for ALL ABOUT JAZZ.
Review by MARC MASTERS for HI-BIAS/BANDCAMP.
Review by DAVID MENESTRES for FREE JAZZ BLOG.
Review by BILL MEYER for DOWNBEAT.
Review for A CLOSER LISTEN.
Review by LANCE HIGDON for DECODER MAGAZINE.
Review by NAZIM COMUNALE for THE NEW NOISE. (in Italian)
Review by RYAN MASTELLER for CRITICAL MASSES.
Review by PHIL FREEMAN for BURNING AMBULANCE.