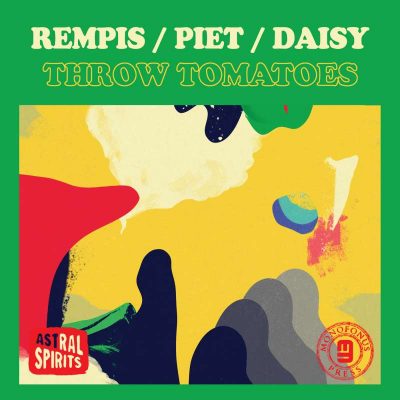 Throw Tomatoes: The Play Within the Playing

Contrary to the fabled image, they didn’t really throw rotten tomatoes during Shakespeare’s time at The Globe Theatre. Vegetables, yes, but there are no tomatoes on record in Britain for another seven-score years after Shakespeare. No matter. The title of this album by the Rempis/Piet/Daisy trio is my own flippant gesture to the listener: “Say what you will about this music; this is what we three offer you, unapologetically. If you are revolted by the madness of our method, well, by all means, revolt: throw tomatoes.” As for the stolen titular references to Hamlet, well… I thought I’d spare you my own wordplay-within-wordplay, this once. As I have so often said: “‘Quotation is a serviceable substitute for wit.’ – Oscar Wilde.”

If there is one thing that perhaps colours my approach to improvising on the bandstand in a way dissimilar to those with whom I share it, it is that I come from theatre first. It was in live theatre that I first experienced that magnificent extrasensory perception that takes place as an actor becomes aware of a trifold energy in the performance space. There is one’s own awareness of self, an awareness of space and troupe energy on stage, and the most mysterious of the three: a psychic awareness of the state of the audience. Getting laughs, of course, renders audible what the actor will use as validation and can be quite the adrenaline rush. Yet, even at the quietest of moments, this constant “read” of a group of strangers in the dark is always accessible, even when one is met with absolute silence. This sounds as though it would be baffling, frightening. Much to the contrary, the silence itself feels not at all like a void, but seems to actively have its own agency, providing the players with willful encouragement to go on.

“Where I am, I don’t know, I’ll never know, in the silence you don’t know,
you must go on, I can’t go on, I’ll go on.”
SAMUEL BECKETT, The Unnamable

This recording is a document of the third and fourth occasion of Dave Rempis, Tim Daisy, and yours truly convening to improvise together. (In Chicago at Elastic Arts and Hungry Brain, respectively.) Our first two meetings were captured and released on Cure for the Quotidian (Amalgam) and Hit the Ground Running (Aerophonic). Each time I play with Tim and Dave is a revelatory experience. A year ago, during the set at the Elastic Arts Foundation in Chicago that yielded Hit the Ground Running, I had a playing experience at least a decade in the making. In a manner like that which I described experiencing in live theatre, at once I felt entirely tethered to my own playing, the trio’s group dynamic, and the sense of a silent but rapt audience. I have played fearlessly, and with a profound sense of ease, ever since…

It is a truism that the trio may be the configuration that offers the optimal conditions for both intimate interplay and stark individuality in improvised music. This case has certainly been proven, time and again: from the standard, ubiquitous “piano trio” format, to the achievement in epic longevity one finds in a trio like that of Alexander von Schlippenbach with Evan Parker and Paul Lovens. In a trio, someone is always taking care of the music. Overlapping swaths of group energy can give way to a drum solo built block-by-block, or a series of overblown saxophone iterations, or a madcap piano cadenza.

(One of my favorite moments on this album occurs on the first track, when Tim and I seem hell-bent on dramatically bringing the music to a close, at about eighteen minutes. Dave, apparently, had more to say, and leads us up a glissando that is a direct tribute to Johnny Hodges, only to make the sound entirely his own after he reaches the precipice…)

“Someone is always taking care of the music.” Indeed, this could not be more true a case than playing with such master collaborators as Dave Rempis and Tim Daisy. Playing with this trio gives me the sensation that I’ve only experienced in the theatre: I feel confidently that I can make all the right moves as a player and simultaneously entertain all the delights of a listener, as though I’m a member of the audience myself.

My thanks, as always, to Dave and Tim, for joining me in the occasional musical trialogue. Also, many thanks to Nate Cross for his help in bringing the music to you, the listener. I hope you enjoy this music as much as we enjoyed playing it. If not, well, see title for further instructions…

THE REVIEWS & ARTICLES:
Review by PETER MARGASAK for the CHICAGO READER.