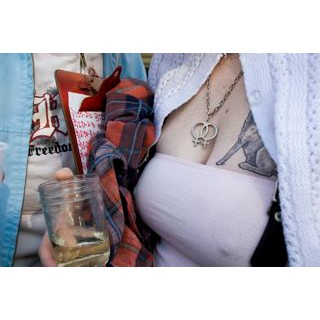 It’s that time of year again: For many, the month of March in Austin means SXSW; for others it means GayBiGayGay. For the past six years, our friend Hazey Fairless has opened up her East Austin backyard to the likes of Erase Errata, Diamond Rings, Big Freedia, Lesbians on Ecstasy, Shunda K from Yo Majesty, Dynasty Handbag, and other big-name queer acts, offering homemade food, cold beer and southern hospitality to a motley throng of queers, queens, dykes, divas, breeders, bois, and anybody else who thinks sitting on a blanket on a sunny Sunday surrounded by nice people listening to free music sounds like a good idea.

Each year the party, which Hazey co-hosts with the performance artist Silky Shoemaker, gets bigger. Last year, the crowd neared 1,000. 2011 marks the first time that GBGG won’t be in Hazey’s yard; instead, the free, all-ages gathering is being relocated to a … well, a larger yard, farther east. And on this, the dawn of the new GayBiGayGay, Monofonus Press has created a document to honor the collaborative spirit we have admired for so long. Featuring photographs by Ben Aqua and Amber Rademacher, GAYBYGAYGAY: Portraits of a Backyard Gaytopia celebrates what makes GayBiGayGay so goddamned special.