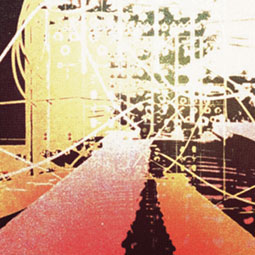 A new double-header from synth-abusing weirdos Cloudland Canyon finds the duo exploring dangerously groovy beat-laden territory. The big payoff comes with ‘Sundowners’, which blends pulsing analogue synthesizer tones with a brutal 909 kick and echoing vocal, sounding something like a blend between Berlin techno and the drug-addled NYC post punk of 1982. It’s a brave new world for Cloudland Canyon since their Kranky LPs, but one which appears to work for them, and ‘Prophetic Frequencies’ is well worthy of close inspection.-boomkat

This one has been in the works for quite a while, and we’re happy it’s finally ready. It’s a milky white 45 rpm 12″, and it’s one of three of this format that will be released by the band before the year is out. It’s a nice collection of 12″ singles out on The Great Pop Supplement, Trensmat, and Monofonus. All three records were mastered by Sonic Boom.