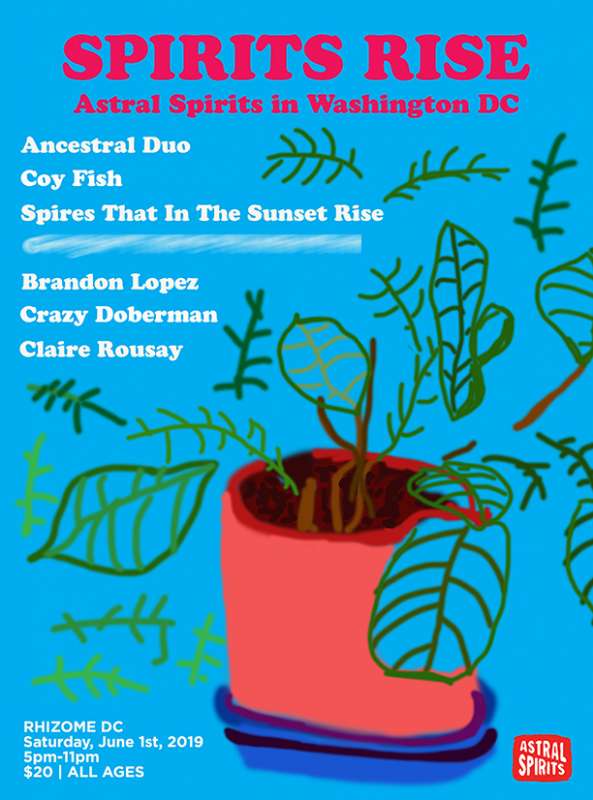 June starts with a longform Saturday blowout in WASHINGTON DC!

We’re incredibly excited to do a little 5 year anniversary / celebration at Rhizome in Washington DC on June 1st, 2019 with some of our favorite folks!  It will be an all day lineup featuring Spires That in The Sunset Rise (NY), Brandon Lopez (NY), Claire Rousay (TX), Crazy Doberman (VA), Coy Fish (DC), Ancestral Duo (DC) and Gregor Vidic & Nicolas Field (CH)!!!  Thanks to the amazing folks at Rhizome for helping us put it all together and asking us to do it in the first place!  Thanks to all the artists for performing and thanks to YOU for helping us get to 5 years (and hopefully many more)!   Click the link above (or HERE) for more info and tickets!

SPIRES THAT IN THE SUNSET RISE have been unsettling and thrilling audiences for over a decade now with their brand of sonic alchemy. Combining traditional acoustic instruments like cello, spike fiddle, banjo, and lately more on flute and saxophone with electric elements and mesmerizing chants, one can call them goth, folk, psychedelic, experimental, electronic–and it all applies. They have four full length releases on labels like Secret Eye and Galactic Zoo Disk and two more on Hairy Spider Legs. The band is paired down to two women these days, each busy performing and releasing solo material as well. Many audiences have seen them expand into pure improvisation lately, but there is still song writing taking place, and often STITSR play the line between the two. Always original, always pushing themselves into new territory, STITSR still very much enjoy playing, as they are coming upon their 13th year.

BRANDON LOPEZ is a musician who deals with improvised and composed music (if one likes to make a distinction). His work as been praised as “brutal” and “relentless”. He’s worked beside many of experimental music’s luminaries; Jooklo Trio, Nate Wooley, Sun Ra Arkestra, Ashley Fure, Okkyung Lee, Gerald Cleaver, Ingrid Laubrock, Tony Malaby, Tyshawn Sorey, Bill Nace, Steve Baczkwoski, Chris Corsano, and many others. He was the 2018 Artist in Residence at Issue Project Room and a Van Lier Fellow at Roulette Intermedium. In September 2018 he was featured soloist with the New York Philharmonic.

CLAIRE ROUSAY is a Canadian-American improvisor, drummer, and curator based in San Antonio, Texas. Drawn to improvisation by a desire to free their percussion practice from the constraints of conventional timekeeping, Rousay explores the emotional overlap of rhythm, speed, and texture as both a soloist and participant in creative partnerships that span North America. Drawing liberatory power and ethical commitment from queer theory, Rousay’s improvisational style employs a critique of the relationship between masculinity and percussion.

ANCESTRAL DUO is the special collaboration of multi-instrumentalists Jamal Moore and Luke Stewart. The two channel the spirit of Ancestry through structured improvisation in unique electro-acoustic meditations that aim to reach deep within one’s soul and offer a connection to the past, using the power of the present, looking toward the future.

SPECIAL GUESTS – “Swiss saxophonist ____ and English-Swiss drummer ____ can certainly whip up a febrile racket, but the duo format leaves plenty of space in their music, even at its most intense. Nicholas is an energetic drummer, scrambling around his kit with glee, but he has a keen sense of swing and dynamics, allowing Vidic to blow his tenor in a tone that is often closer to the lyricism of Sonny Rollins, say, than the jet-engine roar of Peter Brötzmann. There’s no shortage of strangulated whelps and grainy multiphonics here, but Vidic tends to not to play them at ass-blasting volume, and mixes them up with hard bop licks. A tasty slice of underground free jazz.” – Stewart Smith, The Quietus

CRAZY DOBERMAN is an offshoot of the Doberman project that is open, collaborative, and improvisational. While Doberman existed as an Indiana quartet rooted primarily in the industrial and experimental-electronic musical traditions, Crazy Doberman has gone on to incorporate elements of free jazz, found sound, musique concrète, and diverse instrumentation into their recordings and performances. The project began as a series of collaborations with John Olson and has continued to include collaborations with various artists across a diverse musical spectrum. The live set generally consists of a rotating and revolving cast of core members alongside accompanying improvisors.

COY FISH is an improvising ensemble led by woodwind artist and composer, Sarah Hughes. The ensemble consists of Sam Burt on daxophone, Dan Ostrow on double bass, and Nate Scheible on percussion. Coy Fish consists of primarily improvised material with some conceptual composition and word art. The album is an expression of a desire and need for unfiltered sonic recreation. It is music defying simple classification, as each artist freely utilizes idiomatic and non-idiomatic improvisational styles in order to communicate and build a special universe of balanced co-existence with one another. The primitive and raw are abundant here, as are moments of real vulnerability and refined melodic expression.