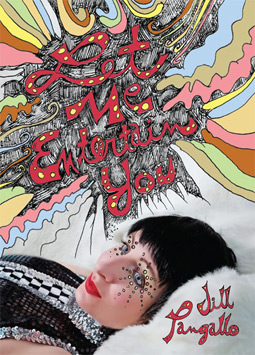 Jill Pangallo is a video and performance artist who has shown, screened and performed at a variety of galleries, film festivals, and venues since 1998. Born in Baltimore and raised in Southern California, Pangallo headed to New York City at 17 and in 1993 received a BFA in Communication Design from Parsons School of Design and a BA in Psychology from Eugene Lang College. For the next 12 years, she spent her days working at a major advertising firm in New York City and her nights performing on the downtown club and cabaret circuit. In the fall of 2005, Jill relocated to Austin to pursue an MFA in studio art at the University of Texas, which she received in May of 2008. As one half of the performance duo, the HoHos, she performs with long running NYC show, Losers Lounge as well as at the annual Stevie Nicks tribute event, Night of 1,000 Stevies. She is currently organizing “public, performative interventions” for the collaborative group, Skote, which she co-directs with Alex P. White. Additionally, she is a founding member of the Austin Video Bee, a multimedia video collective that seeks to promote experimental and innovative work by underrepresented artists. In 2007, Jill received an ArtsReach grant from the University of Texas. In 2008, the City of Austin’s Art in Public Places program, in conjunction with the 2009 Texas Biennial, awarded her a Temporary Outdoor Projects grant. She currently resides wherever it is necessary for her to be.

Monofonus was proud to collaborate with Jill to produce the book that accompanied her recent one-woman show at the Texas Biennial. Let me Entertain You is a collection of writings that inspired the artist, or as she called it, a “celebration of process.”