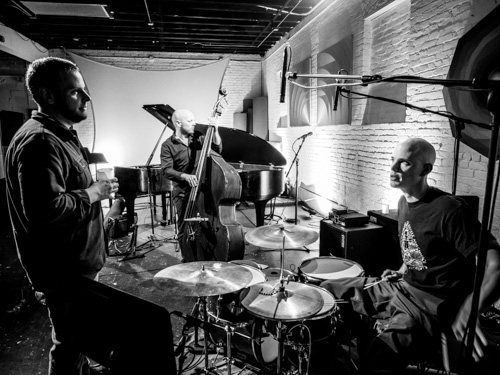 With a name like Icepick, the aesthetic is clearly front-loaded toward incision and the workmanlike carving of structure out of a sonic block. When I first caught these three in action, it was at a house show in Bushwick, Brooklyn during the early winter of 2013. They played in a kitchen and pretty much negated, through the attention provided via force and delicacy, any hunger the onlookers might’ve had. An icepick stabs, but Wooley, Flaten and Corsano are adept at swing and caressing melody as well. This means that across forty-five minutes the three are able to merge painstaking detail, Milesian pathos and explosive, post-Albert Ayler energy music with one well-named experiential tool.    —Clifford Allen

HEXANE is the first release from Wooley, Haker-Flaten & Corsano together as Icepick and will be released on ASTRAL SPIRITS in September 2014.  Although they all have extensive reputations worldwide as individual musicians…their work together as a unit shows an amazing subtlety and telepathy as if they were a well seasoned unit.  Hopefully we’ll be hearing much more from them as a group in the future.

Nate moved to New York in 2001, and has since become one of the most in-demand trumpet players in the burgeoning Brooklyn jazz, improv, noise, and new music scenes.  He has performed regularly with such icons as John Zorn, Anthony Braxton, Eliane Radigue, Ken Vandermark, Fred Frith, Evan Parker, and Yoshi Wada, as well as being a collaborator with some of the brightest lights of his generation like Chris Corsano, C. Spencer Yeh, Peter Evans, and Mary Halvorson.

In the past three years, Wooley has been gathering international acclaim for his idiosyncratic trumpet language.  Time Out New York has called him “an iconoclastic trumpeter”, and Downbeat’s Jazz Musician of the Year, Dave Douglas has said, “Nate Wooley is one of the most interesting and unusual trumpet players living today, and that is without hyperbole”.  His work has been featured at the SWR JazzNow stage at Donaueschingen, the WRO Media Arts Biennial in Poland, Kongsberg, North Sea, Music Unlimited, and Copenhagen Jazz Festivals, and the New York New Darmstadt Festivals.  In 2011 he was an artist in residence at Issue Project Room in Brooklyn, NY and Cafe Oto in London, England. In 2013 he performed at the Walker Art Center as a featured solo artist.

A muscular player whose tone and attack run the gamut from Paul Chambers to Buschi Niebergall, his sense of both openness and control serves ensembles as diverse as The Thing, Free Fall, Atomic, Scorch Trio and the Kornstad/Håker Flaten Duo. In addition to his own Chicago Sextet and Austin-centric Young Mothers, Flaten has also recorded and performed with Frode Gjerstad, Dave Rempis, Bobby Bradford, the AALY Trio, Ken Vandermark, Stephen Gauci, Tony Malaby, Daniel Levin, Dennis Gonzalez and numerous others. Flaten studied at the Conservatory in Trondheim (1992-1995), turning professional shortly afterward, yet his hunger to play in new situations with new musicians – schooled or amateur, frequently recorded or just starting out – puts him in a rare class, that of a truly broad-minded artist. That mettle has served him well, living and developing the music under his own steam and drawing from influences as diverse as Derek Bailey, George Russell, Chris McGregor, filmmakers Ingmar Bergman, contemporary pop melody and gritty punk music as well as everyday sights and sounds.

“…seriously one of the most exciting drummers on the planet.” -Adam Richards, indieworkshop.com

First spellbound by freely improvised music in the mid-1990s after witnessing performances by TEST, William Parker, Cecil Taylor, and others, Chris Corsano began a long-standing, high-energy partnership with Paul Flaherty in 1998. A move from western Massachusetts to the UK in 2005 led Corsano to develop an expanded solo music of his own, incorporating sax reeds, violin strings and bows, pot lids, and other everyday household items into his drum kit. In February 2006 he released his first solo recording, The Young Cricketer, and toured extensively throughout Europe, USA, and Japan. He spent 2007 and ’08 as the drummer on Björk’s Volta world tour, all the while weaving in shows and recordings on his days off with the likes of Evan Parker, Virginia Genta, and C. Spencer Yeh. Moving back to the U.S. in 2009, Corsano returned focus to his own projects, most notably a duo with Michael Flower, Rangda (with Sir Richard Bishop and Ben Chasny) and solo work, now revamped to include synthesizers and contact microphones in addition to his drum set and home-made acoustic instruments.